Popular culture is full of images of people in comas, usually looking physically healthy, in a state of suspended animation, a ‘sleeping beauty’.. There are notable absences: of black or older people, and often a fetishisation of the young, female body.

The patient is often imagined as a kind of sleeping beauty. The inevitable physical complications that come with lying unconscious for months or years are usually not represented. Film producers and scriptwriters have long been fascinated with the possibilities coma offers for creating powerful cinema. The original film called ‘Coma’, for example, was a horror film in which healthy young people are sustaining for organ harvesting.  Based on a novel by Robin Cook, ‘Coma’ was released as a film in 1978 and again as a two part mini-series in 2012.

Whether or not it is the main focus, films often feature characters in coma, and even in films which are more ‘realistic’ than science fiction movies, the patients’ states usually bear little relation to reality. A study of movies showing ‘prolonged comas’ found that all the actors (with one exception) remained beautifully groomed, often tanned, and there was no muscle wastage, contractures, evidence of double incontinence, or even feeding tubes (Wijdicks and Wijdicks 2006).

The study by Widjicks and Widjicks also highlighted how patients were shown peaceful, as if asleep, whereas in reality patients in such conditions may grimace and appear distressed (e.g. struggling to breathe, moaning or retracting from painful stimuli) and may cough and choke (because they cannot swallow their own saliva). This can be hard for family and friends to witness, even though a vegetative patient is supposed not to be able to experience anything.
The idea that vegetative patients are ‘sleeping beauties’ feeds a particular way of imagining the condition which can inform how we think about issues such as pain relief and whether or not it is right to continue or discontinue life-sustaining interventions. The lack of realism in portraying the vegetative state can also mean that the realities are profoundly shocking for families to witness and they feel very isolated in the situation and protective of exposing their relative to the scrutiny of others. Families may feel reluctant to let colleague or friends visit to see the person in such a vulnerable state.

Families we spoke to were often critical of media romanticised representations of ‘the bedside vigil’ where an idealised image of a ‘coma patient’ serves as a cipher around whom the other characters can revolve: reading poetry, expressing their love, or revealing secrets.

Families expressed distress and frustration at the romantic image of the patient in a permanent vegetative state.  The mother of Karen Ann Quinlan (an early famous case involving a young woman in a vegetative state) was sharply critical of how newspapers and TV reports imagined her daughter. She contrasts how her daughter was represented in the media and what she herself witnessed at the bedside:

“Most of the artists drew beautiful sketches, because the public wanted to think of her as a ‘sleeping beauty’. they always painted her with long hair …While the newspapers called my daughter ‘the sleeping beauty’ I sat by my daughter’s bed… A medical description in the court describes her “emaciated, curled up in what is known as doeskin contracture, every joint was bent…”​ (Quinlan and Quinlan, 1977, 215-222)

As researchers in the ‘Coma and Disorders of Consciousness Research Centre’ we became increasingly frustrated at stereotypical images being used by journalists or even journal editors to illustrate articles about this subject. Stock photographs used to illustrate articles include clasped hands (which have the advantage of illustrating care and being anonymous but say very little), brain scans (often showing bits of the brain ‘lighting up’) or beautified sleeping beauties (in one case a painting of Ophelia floating among flowers!) We therefore worked with artists to produce different types of representation. Throughout this course we’ve used the artwork of Tim Saunders and the shadow theatre imagery of Karin Andrews Jashapara (see below). These original representations were produced in collaboration with us, the artists developed the images after listening to some of our interview data with families. (You can find out more about this in the unit on Creative Collaborations). 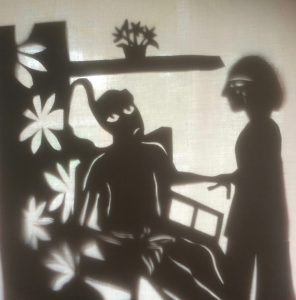 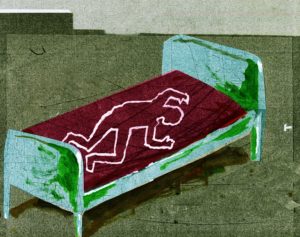 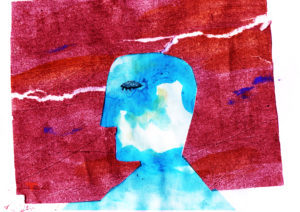 Click here for Activity 2 - Additional Option. For Journalism/media studies students (when this course is part of a degree programme)

Note: Optional activities are offered in many units. These are not part of the core cumulative learning for the online course (short version), but can be pursued if they particularly interests you or fit into a programme of study recommended in discussion with a tutor.

If you doing this course as a formal part of a University degree programme then read the research article by Wijdicks and Widjicks (2006) “The Portrayal of coma in contemporary motion pictures”. You can find the full reference and link to this study (and all the other sources we cite) in the penultimate Unit of this course called ‘Resources’.